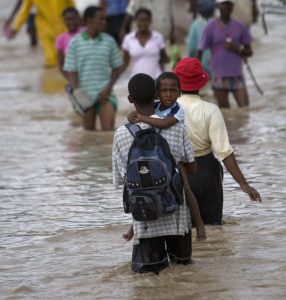 By Samir ABI, Permanent Secretary of the West African Observatory on Migrations

(Presentation given during the Agora Arts and Culture event at the COP 22 in Marrakech, November 16, 2016)

Although the impact of climate change on migration and the link between professional mobility and greenhouse gas emissions is frequently discussed, the impact on greenhouse gas emissions from restrictions to African citizens’ freedom of movement is less of a talking point. The fact that the COP 22 is being held in Morocco, on African soil, provides us with an opportunity to denounce this injustice which is just as much a contributor to climate change.

Freedom of movement and reduction of emissions

The announcement that a number of social actors from Europe were arriving in Marrakech by bus or by bike was met with a great deal of enthusiasm. Coming from Sweden, Holland, Belgium, France, Germany and Spain, these participants â€˜walked the talkâ€™ by travelling in the most pollution-free way they could to get to a conference whose main focus was to establish concrete actions to reduce greenhouse gas emissions on our planet.

However, it wonâ€™t come as a surprise to anyone to learn that travelling to Morocco by bus or bicycle from Sub-Saharan Africa is practically impossible for the members of the African associations due to the multiple obstacles that prevent the citizens of Africa from moving freely around their continent. Unlike Europeans, whose membership of the Schengen area facilitates travel across its borders and visa-free entry to Morocco, the citizens of Sub-Saharan Africa do not enjoy the same mobility.Â  Far from it.Â  They are forced to apply for multiple visas and face an infinite number of obstacles when travelling by road to Morocco.Â  The only way to avoid these misadventures is to go by plane, a form of transport that produces far greater emissions of greenhouse gases, to get to a conference which is supposed to be saving the climateâ€¦Â  In that sense, allowing people effective freedom of movement on a global level could be beneficial in reducing greenhouse gas emissions. In fact, it would enable engaged citizens to opt to travel by bicycle or public transport rather than being forced to fly to avoid having to navigate the multiple visa requirements demanded of migrants travelling by road.

Another crucial aspect on the African continent that connects mobility and impact on the climate is the management of conflict-induced forced migration. Even if this issue is rarely addressed, it is undeniable that military operations, massive bombing campaigns, landing operations and other acts of war are extremely harmful to the environment and above all, have an impact on climate change.Â  It is equally important to stress that concentrating thousands of people in refugee camps on areas of land that harbour forest and animal biodiversity will ultimately lead to negative consequences in terms of environmental pollution.Â  Issues related to arms production, conflict upkeep, and refugee management in terms of sanitising the camps are all compelling reasons to resolve conflicts in order to save the planet.Â  However, distributing the refugees more effectively to avoid large concentrations of people where there is limited space, while introducing measures to make freedom of movement easier, is another option to explore in order to regulate greenhouse gases connected with the conflict-induced displacement of people.

We also cannot afford to ignore the relationship that exists between tourism in Africa, pollution, and climate change. The type of tourism that western multinationals promote in the South, which is highly unsustainable and socially exclusive, continues to be an important factor contributing to climate change on our planet.Â  Regrettably, the town of Marrakesh is an unfortunate example of this type of tourism; a tourism that is highly criticised for its propensity to tarnish the cultural souls of the people in its host countries to make them conform to the standardised, commercial culture that the international financial system demands.

Climate change and migration: The other tragedy

Far from the cameras and projectors that remain focused on the migrants in the Mediterranean, villages and islands continue to disappear along the coasts of Africa due to the rise in sea and ocean levels. From Senegal to Cameroon, the only solution for whole fishing villages has been to abandon their activities and move to their capital cities, only adding to the growing ranks of shantytown dwellers. The same goes for farmers who, depending on the region, see their harvests decimated by late rainfall, flooding or the unpredictability of the climate. Pressure on the cities, scarcity of employment opportunities and governmentsâ€™ refusal to listen, all contribute to thousands of people having to take to the roads in search of an â€˜elsewhereâ€™ that can offer them a better life.

Far from coming up with a concrete solution for these people, who are the victims of the race for productivity and output that has marked the history of humanity since the industrial revolution, the COPs have only managed so far to provide a condemnation of this tragic situation. The only great victory of note is that climate migration is mentioned in the final declaration of the closing session of the COP 21 in Paris and that a task force has been created to deal with this issue. But what are a few lines in a declaration and a task force in comparison to the daily suffering of the millions of people around the world who are forced to move because of the climate?Â  Its victims are not even aware of the â€˜progressâ€™ that was supposedly made regarding their situation during the COP 21.Â  Indeed, the fact that climate change and natural catastrophes are not recognised as grounds for granting refugee status means their victims are left in legal limbo, a situation that no-one seems in a hurry to clarify.Â  Yet, there is no doubt that defining the legal status of people displaced due to climate problems would bring about a change in how they are perceived. Thus, Europe, refusing to shoulder its responsibility in the displacement of these populations, wrongly qualifies them as economic migrants.

The responsibility of the industrial powers is also apparent in the impunity afforded to transnational corporations; corporations that perpetrate ecological disasters by exploiting mineral resources in several regions of Africa that were formerly used for agriculture or livestock. Basically, to extract the uranium required for the production of so-called â€˜cleanâ€™ energy in Europe, or any other mineral resources used massively in our modern consumer societies, thousands of people are displaced from their homelands, very often without any form of compensation. Plundering land and resources on the African continent creates the forced displacement of populations that are denied the right to refugee status and are accused of being economic migrants. Yet, extracting mineral and petrol resources, among others, results in the massive pollution of land, sea and air, the costs of which are, unfortunately, borne by the local populations in the form of State debt and not by the companies involved.

Now more than ever, the COP 22 must focus on the issue of acknowledging the ecological debt incurred by the centuries-old exploitation of the Southâ€™s resources.Â  Now more than ever, an international penal court for environmental crimes is needed to judge companies, as well as their accomplices among the leaders of the South, for putting the existence of so many generations, present and future, in danger. Now more than ever, the status of â€˜climate refugeeâ€™ must be acknowledged in COP negotiations so that, finally, the tragic victims of climate change are considered for what they truly are and not falsely accused of being economic migrants.